The Liberal-Welfarist Law of Nations

A History of International Law 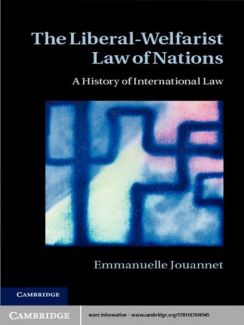 Although portrayed as a liberal law of co-existence of and co-operation between states, international law has always been a welfarist law, too. Emerging in eighteenth-century Europe, it soon won favour globally. Not only did it minister to the interests of states and their concern for stability, but it was also an interventionist law designed to ensure the happiness and well-being of peoples. Hence international law initially served as a secularised eschatological model, replacing the role of religion in ensuring the proper ordering of mankind, which was held to be both one and divided. That initial vision still drives our post-Cold War globalised world. Contemporary international law is neither a strictly welfarist law nor a strictly liberal law, but is in fact a liberal-welfarist law. In the conjunction of these two purposes lies one of the keys to its meaning and a partial explanation for its continuing ambivalence.