Elections at the ECtHR in Times of Democratic Backsliding

Who are the Three New Judges from the East? 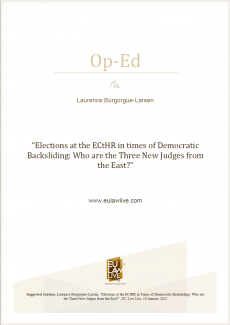 Despite considerable improvements in the elective mechanism at the level of the Parliamentary Assembly of the Council of Europe (fn 1), much is at stake at the level of national selection processes for the election of judges to the European Court of Human Rights (ECtHR), which still suffer from far too much opacity and even bias, rooted in the sociology of national institutions (as a notable exception, we refer to the Moldovan selection process: not only is the composition of the selection committee particularly extensive and diverse, but also the hearings are transparent by being made public on You Tube (fn 2).
At a time when Europe – like many countries throughout the world – is facing a vertiginous democratic backsliding in which old authoritarian States rub shoulders with young illiberal States, the process of electing judges has become absolutely critical. If for a long time the question of their competence was a real concern, in particular following the enlargement of the Council of Europe to the East (fn 3), now that of their profile is at stake, especially when the State that proposes a list of three names belongs to the club of non-democratic States and/or when it is crossed by powerful populist movements (fn 4).