All for this? When the European court of human rights is seized by legal chill 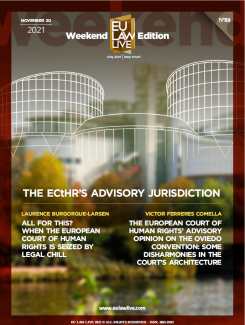 All for this? While for the first time in its consultative history, the European Court of Human Rights (ECtHR) was seized on the basis of a provision that bridges the gap between it and one of the many Conventions adopted under the aegis of the Council of Europe – in this case, the Convention on Human Rights and Biomedicine (the so-called 'Oviedo Convention') – the Court declined, by a majority (23 votes to 4), the invitation to answer certain questions put to it by the Council of Europe's Bioethics Committee (DH-BIO). In order to understand this refusal, it is necessary to consider the procedural context in which this request for an advisory opinion for interpretative purposes was made.